The Celtics are rebuilding. The Bruins are struggling to skate away from a game with three points. Boston’s teams that occupy the TD Garden simply aren’t winning like they used to and fans are trudging from the arena into North Station below, yearning for the brighter times of the past championship years. While these Boston sports loyalists may be disgruntled from the frustration caused by supporting teams whose positions are seemingly always in flux within their respective leagues, the postgame on the tracks below prove to provide one constant. He is the sunglass-wearing keyboardist serenading everyone with his silky funk and R&B jams, trying to bring smiles back to the faces of the faithful after a loss or keep the party going after a win. He is G-Smooth.

Already a busker around Boston for roughly ten years, G-Smooth has been surrounded by music his entire life, and has endured the twists and turns of his passion just like many artists do. A son of a professional guitarist, he gave the stringed instrument a shot, but it proved tricky as a lefty. He got his first set of keys at six years old and never looked back, emulating the Motown and Soul sounds that projected from the turntable at his childhood home. He has played in packed clubs, local bars and, of course, the subway. Every Sunday he plays at church for God, but leaves the singing to the choir.

G-Smooth found his voice as a musician in the subway. He was heavily influenced by Jerry Mack, a blind keyboardist who formerly busked in Boston. He asked him questions about his playing style and experiences with crowd interaction. What worked? What didn’t? What drew people in? What made them stay? He attended local funk shows and had the chance to meet legendary jazz organist Jimmy Smith and keyboardist Bernie Worrell, founding member of the Parliament Funkadelic. He attended, he listened and he learned.

He approaches his sets very altruistically, rarely playing the songs he wants to hear, but rather translating the most current hits into his funk-influenced style, which puts a very unique spin on the tunes. In a city so heavily influenced by rock ‘n’ roll and Top 40 music, grabbing attention from those waiting behind the bumpy yellow line can prove to be a challenge when you’re a funk keyboardist. He mixes in originals and classic, and tends to improvise a bit as he transitions between songs. “Lots of the time, people don’t want to hear the slow stuff,” he claimed.

“It’s going to happen. They may need it more than me.”

At a younger age G-Smooth played with his brother in the Brother to Brother Band, who gained some solid recognition from local bars and clubs for their original music replicating that smooth, danceable sound that molded his style. He has also played some of Boston’s finest spots for local music with local hip-hop acts, including the Lilypad with Jus Enuf, Ryles Jazz Club with Hustle Simmons and Urban Warriors at Strand Theater.

Eventually, in 2005, G-Smooth took his music to the subway, playing mostly at Downtown Crossing and then moving to Harvard Square in 2011, where he found people were much more receptive to the arts and his music. For the past few years, he has found his newest spot at the bottom of the escalator in North Station between the tracks for the inbound Green and Orange Lines.

He has seen a lot in his time busking. A middle-aged man once stripped down into his underwear and danced around the station to his music. He’s seen some days that bring in a pile of money. He has also seen people steal. His response? “It’s going to happen. They may need it more than me.” 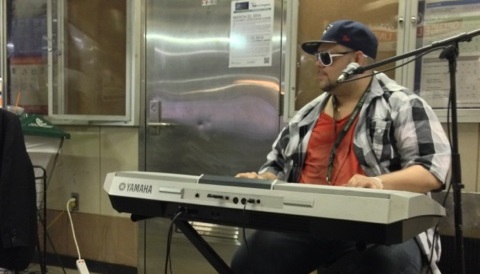 In the future G-Smooth hopes to continue being a celebrated subway musician as well as move into some other ventures such as writing for other musicians, being a go to keyboardist for studio sessions and arranging tracks for artists with his personal twist. He is hoping to write and record a full-length, original album as well, for which he may soon start a crowdfunding campaign. On top of all of this, he and some fellow buskers may start a musical comedy sketch to perform in the subway and in public spaces during the summer months

G-Smooth is a man trying to write his own story. He isn’t on MTV or winning Billboard awards, but he is doing what he loves. And what he does is real. Although having immense experience in local clubs and bars, he is proud to call himself a busker. It’s not beneath him to wear that label. Combined with his talent, this humility will propel him into a future where he will undoubtedly have the opportunities to achieve his goals away from the T tracks.

You can find G-Smooth’s upcoming shows here, and keep an eye out for his crowdfunding campaign for his album in 2015! For business inquiries, he can be reached at gsmooth4ya@gmail.com.